You hung out with my son for five years. Five incredibly important years: from age nine to age 14.

You fed him (mostly freezer burritos), rescued him (when I had to be at the office, the DMV, a meeting), played with him (or just sat and chatted while he showed you his latest video game), took him to the museum (and the zoo: you made sure my 12-year-old knew the zoo was still cool), made tons of movies with him (posting some favorites here) and maybe most importantly, talked and talked and talked with him.


Here’s one of the first videos Ben and Tal posted to YouTube (September 2010).

Going to the park with Ben didn’t mean tossing a ball or a frisbee. It meant strolling along, and talking. You told Tal about cool bands, cool books, off-beat movies and amazing video games. You shared your journey through dodgy neighbors, perplexing college film instructors, Comic-Con marathons and landing your Dream Job*. And you listened, respectfully and with interest, while he told you what he thought.

Enough is enough. It’s a miracle you both still have ears. I would have thought you’d talked each others’ off by now.

I went through Tal’s YouTube channel and found a few great examples of the films the two of you worked on together. It was really hard to whittle the choices down to just the few I’ve posted here, but it was great to re-watch them. I got to laugh again, and to remember what it was like to see them for the first time.

One question I never got around to asking was, “So who decided kittens make such fabulous film props?” (September 2010)

It was a tough call picking out my favorites, but I knew without a doubt this would have to be one of them (except for the middle part: I still can’t watch the middle part):

I must say it was kind of a thrill to come home to greetings like, “Before you watch this movie, I want you to know we got everything cleaned up.”

Still, enough is enough. Haven’t you got better things to do than dink around in Final Cut and spill precious fake blood?


Drama, combat, blood and I do hope somebody ate that poor orange
when you were done (March 2012).

We already miss you, Ben. 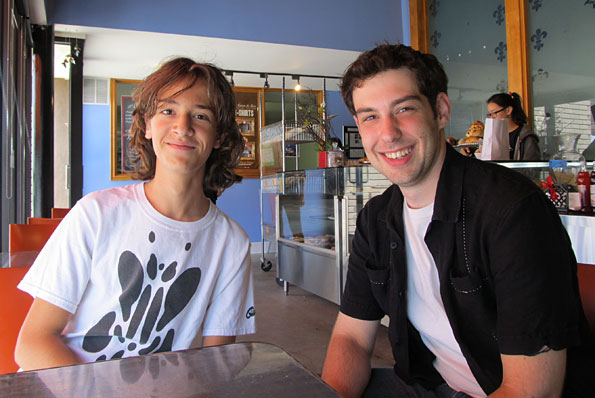 I tried to find an older photo of Ben, but found his Twitter feed instead, which, out of kindness, I won’t link to here. I will say, however, that it’s generally a good idea to log out of one’s social media accounts when one leaves the office.