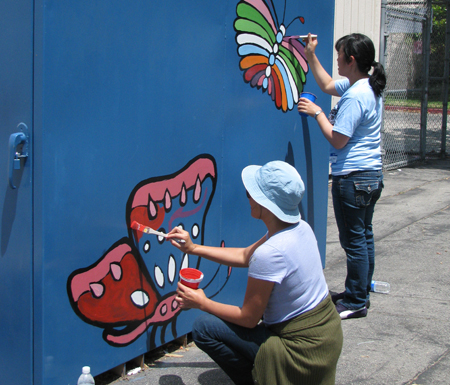 This summer, I designed and directed a mural project for Saturn Elementary, a Los Angeles city school. Community organizer and “Rings of Saturn” leader, Melissa Patrick, accepted my offer to help, and showed me an interesting approach she had spotted: An artist had pre-painted what amounted to a solid-lined coloring book, and dabbed colors so volunteers knew how to fill in the spaces.

Melissa requested garden themed motifs, and I wanted something that was sensitive to the cultural context of the neighborhood. Even more importantly, I wanted to give students as much visual complexity as I could pull off, while still leaning heavily on the support of volunteers who’d be short on art skills but long on heart. Finally, a fill-in-the-spaces project can quickly become tedious, so it was important to make sure this would be fun.

During my research, I stumbled on some beautiful folk Hispanic butterflies, like this Chorotega pottery piece from Guatil, Costa Rica:

And this tray full of butterflies from Olinalá, Guerrero in Southwest Mexico:

I did a number of sketches using photos like these as inspiration. The intent was not to copy the photos or to have things tightly planned, but to develop a loose set of devices to be improvised (with a pencil) around the school yard. After the sketches were done I went back and created the “coloring book” effect with painted black strokes.

It was odd (but kind of fun) to walk onto a school yard with a can of black paint. I would begin long before teachers and summer schoolers arrived, but to get the work done, there were a few days I was there late enough that interested children could follow me around and ask questions. It was only as the project was wrapping up that I heard there had been a little concern about the mystery lady painting black butterflies all over the campus.

The volunteer day had been scheduled and arranged by Melissa Patrick and Sheela Mathai (Park Planner, L.A. County Department of Parks, and Rings Advisory Board member). While I would have preferred to engage local families and students’ parents, it’s much easier to connect with already-organized volunteer groups. This time, about 50 members of Sheela’s own Pacific Crossroads Church would be coming from all over the greater LA area to help us out.

The morning of Painting Day, I was dabbing the last color guides on the butterflies (think paint by numbers) when the volunteers began arriving. 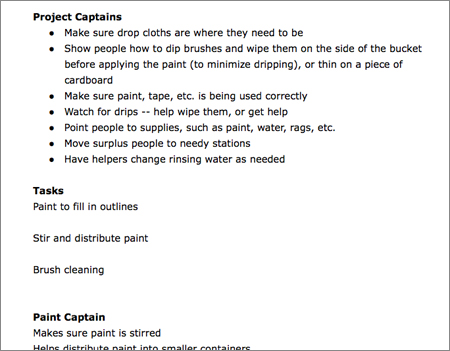 We had a lot to squeeze into a half-day event, so we maximized our impact by doubling the planned team captain count, and created two “lead captain” positions. It proved highly effective to lean heavily on these awesome people. They were empowered to make more decisions and answer more questions while I focused on aesthetic guidance and the occasional artistic woopses.

It was an intense four hours (seven for myself and the two captains, Sheela Mathai and Chie Ryu). Even if these hadn’t been volunteers, it would have been easy to feel abundant gratitude for how much energy and heart were poured into the project. 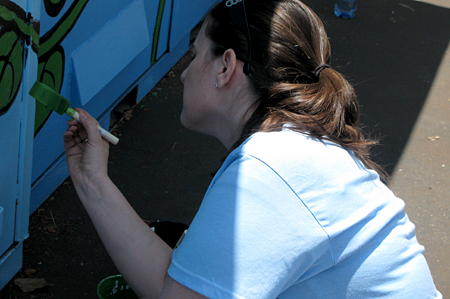 Practically speaking, a tightly packed day like this would have also benefited from the additional framework of a loose schedule: The team was jumping suddenly into a project they knew almost nothing about. To be in alignment about when we wanted things to happen would provide one more point of reference for such a wild ride. That said, the extra captains and detailed task list were a success. Moving from group to group (making sure to acknowledge the hard work, and handling mistakes with humor and trust), it was clear the team was having a whole lot of fun, too.

By the way, there’s an interesting “Phase I” to this story. You can read about it here. 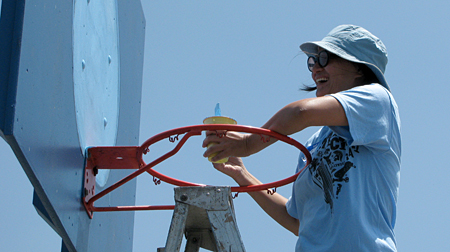 Hey! That’s my landlady! She promised she’d come and help. I was so caught up in the work, I didn’t notice her until the last hour. Hi, Catherine!