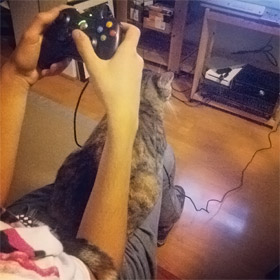 This essay was written in preparation for a talk I gave at a homeschooling conference this summer, but it’s intended for all types of families and learning styles. It also very purposefully steers clear of defending or judging games and gaming. Instead, I focus on finding pathways to connection, a very important ingredient in a genuine (and lasting) learning process.

Often, we’re told the best way to connect with our game-loving kids is to play with them, and that’s a good start. But for parents who are not good enough players for things to be fun (I’m terrible at platform games and a coward at shooters), or who are struggling with “getting” their kids’ games, there are other ways to connect and to discover connections. I’ll talk a little bit about why connection is so important, and then we’ll move on to what games are about and the many (really, many) ways we can relate with them. I hope you’ll come away with new insights about how to keep the gaming discussion open and flowing with your own family.

While I’ve got a lot of ideas about connecting with gaming kids, I have no doubt there are lots of people who are doing things I never dreamed of. Oh, and by the way, there is huge debate about what a game actually is!

I worked in gaming, so I have a little context, but I am not a gaming expert. A lot has happened since I left the industry, so the only thing now that keeps me up to date is my old gaming friends on Facebook and (especially) my son.

He is 15 and loves most games, and is really passionate about them. I truly am a coward at shooters, but I love to play story-driven puzzle games, where you get to find clues and unravel some kind of a mystery.

The importance of connection

Among the learning tools you’re using right now in your family journey, one of the most underestimated may be Connection.

As adults, connections are how we build relationships. Whether the other person is a friend, someone we work with or a like-minded parent, we start at what we have in common. The more we have in common, the more fun we have in the relationship. It’s generally after we’ve discovered what we’ve got in common that we begin to also enjoy our differences. Those things we share, whether they’re hobbies, personal values, children the same age, or the same home town… those things can become a kind of pivot around which we expand and grow.

Imagine you and a friend are into camping. It’s likely you both have different things you know about camping. If you go on camping trips together, or even just talk about camping, you’ll probably both learn new tips and tricks, share camping stories you’ve experienced or heard, and so on. The point to consider is: You now know that when you get together with this friend, you’re going to get to discuss something you care about. This person gets you. They get what’s cool about camping!

So one day, during a conversation, maybe your camping buddy shows you some beautiful nature photos they took while they were on a trip, and you think to yourself, “Wow. These are cool!” You start asking questions about how they got such nice photos, and good places to see other people’s nature photos, and…

Abracadabra! You’ve now learned a few new things about photography and cameras, and you’ve scribbled down the names of some amazing outdoor photographers you’re going to look up when you get home.

Your camping connection had nothing to do with “Learning”, but look what’s happening!

This is a big way we humans learn, and maybe more importantly, this is how we grow.

I’m a single working mom, so I’m busy. The way it works in our house is that we are usually in earshot of each other. If my 15yo is playing, I can hear the game noises and he can comment to me or call me over when there’s something he thinks I should see. This is how I know most of the Portal 2 story and share an appreciation with my son for GLADOS, the game’s brilliantly devious robotic villain. Sometimes, he comes across a game he feels I absolutely need to play. Those tend to be the quicker-to-play story games like Dear Esther. Then he sits by me and coaches me a little as I make my way through the game.

I wrote down some “connecting” anecdotes, and then asked my son for his. He didn’t have anecdotes, but what was really interesting to me was, while he agreed with my examples, they weren’t necessarily the most notable examples for him. He couldn’t put his finger on why he experienced connection while he played certain games, but he felt my guesses might be close: I was simply especially excited and interested while he was playing certain games. Back when I asked him (at age 14), Minecraft and Portal 2 were the two games he heard me discussing the most with other parents. They’d ask, “What IS this…?” and I’d answer, “OMG… let me tell you…”

This is a Golden Age for electronic games

These are very exciting times!

Not only are people coming up with surprising new puzzles and experiences and challenges, but many ideas that in the past were too complicated for the technology can now be done really well. Also, the playing field has been leveled so that a team of two can get their game published and played almost as easily as the big game companies. Indie developers can walk an out-of-the-box concept right past the stodgy marketing people and into the hands of gamers!

Platform games are increasingly imaginative, with huge varieties of art styles and surprising twists that make you think differently.

Immersive story games are more sophisticated, giving more space to beautiful artwork, smarter side characters (that respond to your behavior and/or remember your past actions, etc.), more complex challenges, and their writers are tackling poetry, lyricism and social issues.

Multiplayer games are getting more elaborate, and smarter. The communities are safer for those who require a safer playground, and the games’ intelligence can detect more and more nuance in a player’s behavior.

One thing I hope I can excite you about is that game ideas are exploding right now. There seem to be surprises and breakthroughs at every turn.

Here’s a very loose look at games to hopefully begin giving you some points of connection. See which parts you personally relate to. Any of these can be something to wonder aloud with your kids about:

Making games has a lot of parallels with movies in

So if you can talk with your kid about a movie, this may be an anchor for you in discovering conversation about games.

Two of the ways a game is not the same:

Combat play!
Not big into combat? Following just the storyline of a game helps a lot. You can still find ways to follow combat play, or for platform games (I sometimes have trouble if it’s moving really fast), the ongoing action.

Scary games!
If I’m going to sit and watch, I bring a pillow. These are surprisingly effective barriers against jump-scare critters and other spookiness. I recommend a full-on bed pillow: those lame little throw pillows just won’t do. This also provides additional entertainment for your child. 🙂

(maybe just to ask yourself, as a way to begin building your involvement)

APPENDIX A: Electronic games usually are a combination of these things

As game designers get more experimental, some of these pieces get rearranged, which can also be part of the fun. Here’s the breakdown:

For some games, by the way, a reward moment blends back into a new introduction or training.

APPENDIX B: Kinds of games

Yikes! Have a look at the explosion of genres listed in this Wikipedia entry to see how much video gaming continues to evolve. This section of the essay was originally a list, but it”s too huge a subject to squeeze under a subtitle.

Just one for now. I hope to add more as I get time.

LA Noir is what I refer to as a truly adult game (because how is gratuitous boobs and blood adult?). You play a character who is basically good, but also “flawed”. There is nudity, but it isn’t gratuitous. Instead, it’s starkly semi-historical (brutal murders, based on historic crimes). The interrogation scenes are remarkably subtle (the player must determine whether their subject is lying), which has inspired a lot of excited discussion in the gaming world. Most interesting to me is that the player encounters racism, corruption, early glimmerings of McCarthyism, and other issues that bring the experience to a whole new level. Since we live in Los Angeles, we took the train downtown and looked for some of the landmarks from the game. We also checked out some old noir films, where we spotted a set my son had visited in the game.