If you can 3d it, you can hold it in your hands Communicator’s First Commandment 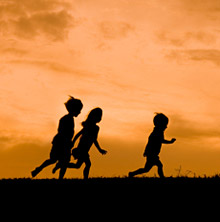 I’m now a 3-week-old Tweeter, and new enough to be having daily ah-ha’s (and woopses). I’ve followed, then un-followed some good folks whose messages were more than I could process. I’ve obsessed over replies and RTs, downloaded TweetDeck, and installed, uninstalled, and then reinstalled TwitterFox.

I waited this long to sign up because I just knew all this would happen, and feared the rest of my life would come to a standstill. It was only when I watched election day tweets posting live at about three per second that I realized the standstill had happened anyway. A large, lovely, inexorable wave was headed toward and over me, whether I chose to jump on or not.

This is not a “How to Get Started with Twitter” post. Those are here and here, and elsewhere. This post is dedicated to other new Tweeters, though, because there are a few people I recommend following, mostly—but not only—if you are thinking about ways to use Twitter as a business tool.

1. Mack Collier
2. Chris Brogan
Both Mack and Chris would be saying essentially the same thing if this were 1909 or 2109, because their insights are based on a fundamental respect and esteem for other human beings. They do have a vision for the future of social networking (not just online), and they know how to use it. On their blogs (Mack’s main blog is The Viral Garden; Chris’ is plain old Chris Brogan), on Twitter and in person, they discourage people from using social media as another “tactic”, and believe that the really outrageous successes come from listening and making genuine connections. I must add that Mack is way more into sports than I will ever be, but I’m dealing with it.

3. Todd Henry
Todd doesn’t post more than once or twice a day, but he’s always thinking and writing about something intriguing. His blog, Accidental Creative, as well as his tweets, are so practical, immediately usable and down to earth, I’m delighted he’s in my universe, and happy to share.

4. Guy Kawasaki
When Guy is on a roll, I see as many as 30 posts from him in a single day. I’ve considered un-following, but too many of them are links to stuff I want to know about. Because of this, I’ve given him his very own group on TweetDeck, and have learned to quick-scan it for gotta-reads. For more practical inspiration, check out his blog, How to Change the World.

Side note: You’d think this fella would be too busy to reply when I tweeted him about a $5 bet I made that he did, in fact, know how to make a screenshot with an iPhone. The mensch replied within two minutes.

5. hashtags
Trust me on this one. If you’re new, you probably won’t use it today or next week, but eventually, you will come back around to it. Learn more about hashtags here and here.