My son, Tal Day, recently won some nice recognition for a documentary short he put together via the film arts program at Venice Arts. 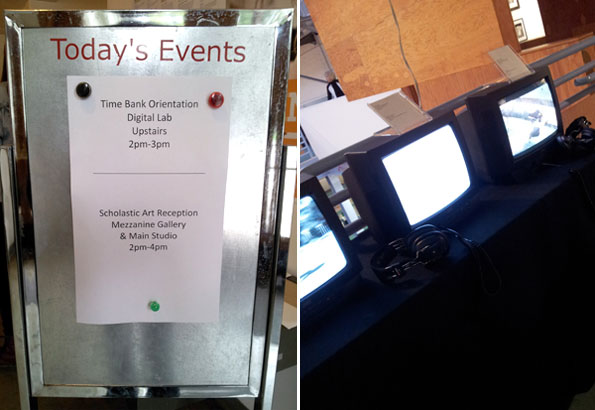 The film, Right Here on Venice Pier (YouTube), won a California Regional Gold Key Award, and was shown with other award winners at the Pasadena Armory. The same weekend it opened at the Armory, it was aired at the Houston Museum of Fine Arts Extremely Young Film Festival (Films by Teens).

We headed up to Pasadena, checked out all the amazing work (photography, painting, sculpture, mixed media, as well as film) and hooked up with friends. I wasn’t prepared for the massive “photo op”, but there’s still something I like about this huge clump of teens on the Armory balcony and all the mad activity around them (click on the photo to see it full size).

After checking out the snack table (where I wasn’t the only one disappointed to discover that the “coffee box” dispensed lemonade) and properly memorializing Tal’s event with the fabulous Guder family, we wandered around this picturesque corner of Pasadena with our cameras.

Between the pretty architectural details and the camera-friendly overcast day, there was plenty to discover and frame. When we’d had our fill we decided to skip lunch and head home. As I adjust to life with a teen and increasingly impressive artist, I vote for more afternoons like this.

P.S. All photos in this post are mine. If I can convince Tal to share some of his, I’ll come back and add them.