A passion for crafting the perfect cup of espresso and a warm, outgoing personality are taking client Tamara Muro to stellar heights in the town she loves. She showed me retro winged logos she admired and I created a slightly updated, original pair for her. Since the earliest phases of this design (before she opened the first shop: see the first phase here), the name was changed, and I continued to make eensy refinements until we arrived at the final work you see here.

Above is the logo for the original location, and below is a version for the new location, opening soon. 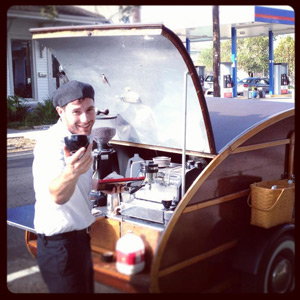 The logo version below is for this awesome little wood-paneled trailer that pops up around NOLA. Tamara found it and had it refurbished in Southern California before bringing it home to add the gear. Fans can follow @VelvettoGeaux (and other Velvet pop-ups, I hear) on Twitter  and Facebook, keeping track of where to head for the most amazing espresso in one of the world’s most amazing cities.

This little magical trailer has also been known to make occasional appearances on the sets of major Hollywood feature films.