This is one of my all time favorite photos of my mom, Julie Finger, at work in her first, tiny Los Angeles studio.

Her initial exposure to design was probably the best possible: tactile handling of metal and wood type and the smell of ink in Mumbai, at her father’s printing company. She brought those experiences with her to the US in 1954, and studied at Art Center School in 1957. She remembers her first design jobs fondly, but started her own studio when she had her first baby (being me).

Here are three of the many things I learned from her about the art and the business of graphic design:

1. Don’t serve your tools: make your tools serve you.
When I was about 11, I was drawing in her studio on a sheet of paper I had taped to a mat. I was using a T-square and had taped the sheet down to insure consistent angles. 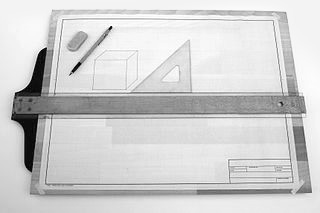 She saw me contorted around to the side of the mat as I focused on one edge of the paper and said, “Why are you killing yourself?” She pulled the mat off the table and spun it to the perfect angle so I could work comfortably (the mat had enough rigidness so I could still rely on the T-square).

Later, with the advent of digital tech*, this perspective has been priceless. Mac or PC, Photoshop, HTML and Web 2.0: they are all just tools I can spin in any direction to realize design ideas.

2. Cheat.
If making the artwork perspective incorrect looks better, than use incorrect perspective. If violating a rule of typography makes a stronger composition, if adding blue to the strict corporate ink recipe makes the color appear to be more on-brand, then do the truer thing and not the “right” thing.

3. Never submit a design you don’t feel good about.
If it’s a client’s goofy idea, get behind it enough to make it work (and submit another one alongside). Often, realizing they are heard and respected, the client will go with the better idea (and if you’re honest, you’ll admit when theirs is the better idea). If they don’t go with the best idea, at least they’ll be going with a good idea.

For me, there was always a studio. Whether or not it was adjacent to home, it was always my after-school destination. I dumped my books and raided the rubylith or the marker drawers. Later, I did “chores”: preparing type galleys for paste-up or running the monstrous stat camera. I learned way more there than at school. Whether she realized it or not, much of it I learned directly from her.

* Julie was also my first tech geek and Mac Evangelist. But I’m saving that story for another day.

11 Responses to My First Design Teacher