By Penina Finger On July 5, 2013 · Leave a Comment · In Creative Process, Illustration, Portfolio

I’m really happy with this illustration I did for the ongoing story project, I am not actually a butterfly. I had the image in my head for awhile before I was able to find the time to make it happen. Maybe that’s why the process seemed to go so smoothly when I finally did it.

With my favorite fine-point black Sharpie, I stippled a small group of black “stars”, then did a quick test scan to make sure I could pull it off.

I inverted the artwork to white on black and added some blurred layers to experiment with glow effects. Borking around with degrees of glow (using the Gaussian Blur filter—much better than the simple Blur filter) led to the discovery of a nebula effect: extra pretty!

Many, many more stipples later, the drawing was re-scanned and the densely-starred sky was finalized. Now I needed my owl.

Research took a few days, partly due to the difficulty of finding decent slots of time and partly because research like this reveals new insights (in this case, about things like “how do you know an owl is an owl when all you can see is a shadow?”). Given time to ferment, those insights will mesh with the original plan, and change it. 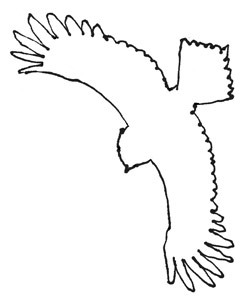 I added the best references to a research board for this story on Pinterest. One that really struck me was a beautiful shot of a Barred Owl in flight, by Bonnie T. Barry.

Inspired by the photos, and given a few days to take things in, I was ready to try and speak Owl.

The drawing at right was the first try. I’d been prepared to cover many sketchbook pages with drawings of owls. To my surprise, this first one just seemed to nail it. I loved the drawing so much I decided to leave it as is and add the solid fill in Photoshop. 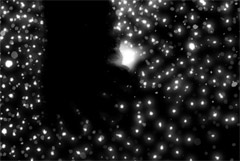 Once the completely blackened silhouette was positioned over the stars, I added more roughening and blur effects to its contours to harmonize it with the background and give it a little implied motion.

The bright flash behind the owl’s lower wing is an important part of the story. It took a few tries. Even over a week after everything was done and the artwork was posted, I found myself going back to rework it (thank you, internet).

The name of the story this drawing is for is Unshakable. It starts like this:

The night sky over the savannah sparkled with a dense carpet of stars. Across them, a small, black shadow darted furiously, and seemed to trace a blazing path of startling constellations…