Parenting, Not Parenting and freedom to choose 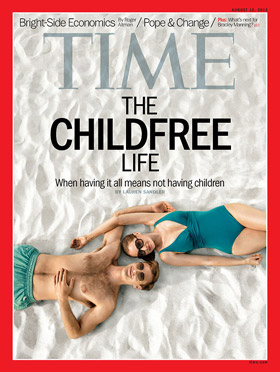 The cover article starts with some promising examples and facts, and names some real challenges (click the image to read a preview: you must be a subscriber to see the whole article).

I’ve been reading Time Magazine’s special issue on child-free women and families, and have found myself in an odd position. I’ve recently contracted to manage social media and online marketing for CMomA.org, an organization that supports women who are childless both by choice and by circumstance. I’m also the proud mom of a teen.

I had my son “late”, at age 39. The delay gave me plenty of time to experience the weird jabs about my unworthiness to parent, as well as to begin to wonder whether something I had pretty much taken for granted would actually happen.*

CMomA’s goals are both far-reaching and complex. They reach out to women who are happily childless as well as to those struggling with fertility, adoption and other expensive, heart-rending choices. Some just want a place to feel accepted and enjoy their freedom. Others need advice, an understanding ear, or much more tangible support: CMomA aims to help families cover the costs of adopting children in need, as well as encouraging mentorships and fostering.

I’ve only been part of the team a few weeks, and am already so inspired by the women I’ve met. Beginning with CMomA founder, Marcy Cole, I am encountering a group of incredibly passionate and unfathomably wise (and that’s not hyperbole) human beings.

What a day! The CMomA Think Tank meeting, July 2013

The creation of the adoption group is one facet of Marcy’s desire to express the energy of “mothering” in a broader range of ways, from community involvement to pets to individually creative examples. One of our initiatives is to regularly highlight current and past “Women Without Children Making a Difference”.

Still working to comprehend the depth of this community and seeking ways to connect in authentic ways, when the Time Magazine special issue appeared I snapped up a copy. Oddly, after all the incredible beauty and inspiration I’ve been experiencing as I connect with CMomA, I found myself conflicted by the stories I was reading.

The issue seemed to focus on either the plight—the isolation and marginalization—of childless women or comments that made them seem as though they felt arrogant contempt for women who, whatever the reason, do have children (though not entirely: Carolina A. Miranda grapples gracefully with the S Word). I began to feel angry and resentful toward these arrogant women who presume to know what’s wrong with me because I’ve chosen to be a parent.

Then I remembered: This has not been my real life experience. Okay, yes, the frustrations, hurts, even the harsher criticisms, are valid and are very much there. But so is the mutual respect for different choices and personal struggles. And so is the shared desire to come to terms with society’s and our own expectations of us as women.

In my pre-parenting days, I found myself at the butt-end of sarcastic quips insinuating there must be good reasons I wasn’t a mother. I was too selfish, too cold, obviously too nerdy, etc. I’ve now heard the equally cruel remarks about how stupid, misguided, and yes, selfish, women are who have chosen to have children.

What makes all this so heartbreaking to me is that no matter what we choose, we are judged and isolated. Whatever choice we make around the issue of parenting, including the choice to not be a parent, we draw ire, we draw derision, we draw pointed, personal condemnation.

We draw judgment for breastfeeding (hey, didn’t Time do a similarly divisive issue on…), we draw censure for choosing to bottle feed, we’re derided for choosing to work when we actually could afford to stay home with the kids, and we’re harshly judged for choosing to forego kids altogether.

I used to say that no matter how un-political I thought I was before children, as soon as I gave birth to my child I became, in the eyes of nearly everyone around me, conspicuously, intensely Political. For every parenting choice I made, someone was going to be deeply offended, even threatened. Now I’m learning the same goes for those women who say out loud, “I don’t want to have children.” I realize that if I had taken that step, I would have been met with the same isolating derision.

Seen from yet another perspective, there may be some understandable reasons why we humans judge each other. I suspect this is because somewhere in our consciousness we have a foundation of rules and principles on which we believe our society is based. This gives us a sense of order, a sense of our own identity and helps us feel safe. If something threatens that foundation, we feel it as a real threat to our world and to our very existence.

Still, I’m willing to bet that many of the bluntly quoted women in the articles had their comments pruned to sow the most controversy—to starkly emphasize as much “threat” as possible. Having traveled widely and spoken frankly with human beings in many, many walks of life, I’m also willing to bet most of them have a whole lot of opinions and multi-faceted insights, including quite a few that could engender greater understanding.

Reading the Childfree issue of Time, I felt saddened and exhausted by the insistence on creating division. Controversy sells magazines, but how about thoughtful controversy? I felt like my brain was being squeezed into a crevice. The challenges and questions around choosing to be child free are more complex, and deeper than the editors of Time seemed willing to plumb.

For many childless women, the publication is a validating document that finally says, in print and loudly, what they’ve been trying for years to explain to their family and friends. I just question whether it says it in a way that truly fosters understanding—for anyone. The mainstream press seems to insist on being an arbiter of what is “normal” and what is “fringe”, shaving off massive swaths of complex, iridescent and nuanced grays to deliver only blacks and whites. Instead, with a little more humility and curiosity, it can do so much to help us sort through the broiling forward roll of our evolving society, if it would only choose to be that voice.

* In fact, I found a book that helped me begin coming to terms with the possibility that motherhood may not end up happening for me. It was a children’s book: Barbara Cooney’s Miss Rumphius

, which tells the story about a woman who chose to travel the world and live in a house by the sea, rather than (though the words are never spoken) having children. Miss Rumphius promises her grandfather that not only will she pursue her dreams of travel and a house by the sea, she will also do something to make the world more beautiful. Finally, well-traveled and happily settled in her seaside home, she keeps her promise by planting lupines across the countryside.

When I had my son, my copy of Miss Rumphius became part of our great picture book library, and we read it often. I wanted him to know that raising a family was just one of many options he could choose as an adult.